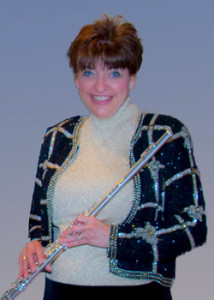 Lynn, a native of Providence, Rhode Island, has been playing flute with the group Just Jazz since its inception. She has been playing for her personal enjoyment for most of her adult life. Her background is in Classical music, but was highly influenced by her Dad at a young age. Even though jazz was not her first love at that the time (Rock n’ Roll prevailed), she still appreciated the type of music her Dad played with his jazz band, the “Stardust Four”.

Lynn had stopped playing by the time she left college. In 1984 she met her future husband, Bob. When they started dating, Bob got her to start playing again. He mentored her to the Jazz genre and she has been honing her jazz improvising skills since. She has a great love for jazz and enjoys listening to the music of Stan Getz, Frank Sinatra and Diana Krall.